You are here: Home › LifeStyle › Nigeria › Are we at War in Nigeria?

Are we at war in Nigeria?

I guess following the downside of democracy, I guess this is a safe question, we are at war with corruption, under-development, poverty and a host of our problems but my focus today is on the insecurity created by the Islamic group “Boko Haram” and how much it has exposed the porousity of our Government, the presence of weapons of mass destructions and this much Amunition presence in the country outside the hands of Law enforcement Agencies. 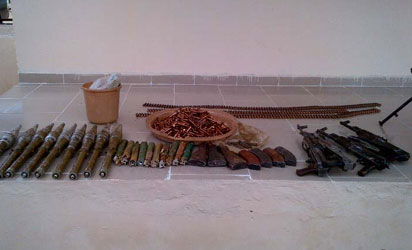 The last 6 months has been a cat and mouse game with the Joint Task Force, Boko Haram attacks, Inter-Tribal Attacks in Jos and everything pointing to a Nigeria that is looking at a collapse. Biafra is trying to use the international community to solicitate for its Independence but i think they still have the ammunition to launch a “forceful let us go again”, The Militants group in South South went with the Amnesty program 3 years ago but we all know that only less than 40% of the weapons were surrendered, the other 60%+…?

I cant but imagine how long this people have been stockpiling ammo in the country, I dare say we have not seen the worst yet and it is possible that there is something stronger and more dangerous than this rocket launchers and other weapons being found and seized by the JTF. By the way…where are the ones they keep seizing, are we sure it is not back channeling back to another source?

Impeachment!!! President GoodLuck Jonathan!!! Solving this Current Boko Haram crisis!!! Funny we came into our 4th democracy era hoping for an economy change, Power stability and now security takes over and puts everybody at risks. What is this present Government doing? People have called for the stepping down of Mr President owing to the fact they seem not to see what has been done by the Number 1 man to solve this crisis. But wait, Unto this matter, we have sacked and Changed the IG of police, the Minister of Defence and the National Security Adviser.

The matter come be that “Oro yen to oju sumi”

From the last 3 months, All i hear from the talk space is that the President has refused to use the right force like “A State of Emergency in these troubled state” to fish Boko Harams out, That He is trying to negotiate “Why negotiate to a group we have termed Terrorists” who cares less about Adult or Children, Muslims or Christain or whoever …. Well, Im not yet up in the ladder but i believe this is not the first time Nigeria will have uprisings like this, Leaders of the past dealt with it, So should Mr President be able to and He should ask the past ones better on how to go about it.

Are we at War? Is this the point where we break finally? Into 3….into 6…. into 1? 2012 has been a rather decaying year for Nigeria so far, everything is Dark and we are just there…we hope as usual that that small light at the end of tunnel still exists or we head towards that sure destruction that is eminent if we continue like this.

Speaking of which, While the Top guys and Government keep thinking and fighting, what can we do from the communities, from the media, the social trends… is there a way to help aside just relaying the broadcast?